While tree worship is not uncommon in Hinduism, it has gained prominence through ages just like the concept of  Panchbootha - five elements essential for our survival and their association with Lingam ( Lingam: Lord Shiva's aniconic  symbol).  As you may be aware,  tree worship is common among  certain tribes of many countries.  Regarding Hinduism, as a matter of fact, each Hindu temple is  traditionally associated with a particular tree. Among the plants, the Tulsi plant or Indian "Basil"  is regarded  as the holiest of all  plants and  an important symbol in the Hindu religious tradition. The  venerated Tulsi plant is an integral part of almost all pious Hindu families, and  daily  at home women worship  Tulsi  kept in the Tulsi Madam. Tulsi Maadam or Vrindavan is a small platform 2 to 3 feet high made of brick. It is kept in the middle of the house in the courtyard or in the back of the house near well.  It is believed that the "God of Creation" Brahma resides in its branches, so are other Hindu deities in its roots. The river  Ganges, it is said,  flows through its roots.  Vaishnavites consider that this plant has close affinity with  God Vishnu, the Protector. It is also an earthly manifestation of the goddess Tulsi.  In all Vishnu temples, the offering of  Tulsi leaves  to the main deity is mandatory in ritualistic  daily  worship. According to the Devi Bhagavata Purana  this plant is a manifestation of  of Goddess Lakshmi, the consort of Lord Vishu and she is supposedly takes care of  the wealth and property of the family, besides protection.

Tulsi plant grows  in the tropical countries and basically there are two varieties: Dark or Shyama tulsi - with dark green or purple leaves and purple stem and light or Rama Tulsi - with bright green leaves.  Rama Tulsi  has good  medicinal value whereas the Krishna or Shyama Tulsi is commonly used for worship. Normally both varieties are used for medicine and worship because it is difficult to differentiate them in some places where the soil conditions play a vital role.


There are a few legends about the origin of Tulsi, one  being related to  the Samudra Manthana, the  massive churning of the cosmic ocean by the Devas (Celestials) on one side  and asuras (demons on the other. Towards the completion of churning  Dhanvantari appeared from  from the ocean with a pot containing the elixir of immortality - Amrita .  Both demons and devas vied with one another to get it. Realizing the danger that might befall if the demons got the pot of Amrita, Vishnu  himself  secured it for Devas and in doing so he  shed happy tears. It is believed that  the first  tear of  fell in Amrita and formed the Tulsi.

The plant is considered as the woman's deity and a symbol of womanhood. Traditionally in all households only womenfolks worship Tulsi plant. The auspicious days for Tulsi worship are Tuesdays and Fridays, scriptures say daily worship is good for the welfare of the family. Whoever takes care of Tulsi plant  will not only gain divine grace but also  will attain Moksha (heavenly abode).  Part of worship of Tulsi includes cleaning the surrounding areas as well with water almost daily and offering of food, etc. The Tulsi plant is often worshiped twice in a day: in the morning and in the evening. Commonly  an oil lamp  is lit near the plant or in the niche provided for it in the Maadam or platform.

In daily  worship of Vishnu, Krishna, Vithoba, Rama  and other Vishnu - related deities. Tulsi is considered holy. In all Vaishnavite temples  one can see the Tulsi Maalas- Tulsi garland on the deities in the sanctum. It is common to see  Tulsi  garlands being  offered in veneration to Vishnu or Krishna deities. Vaishnavite Pandits wear Tulsi Malas  made of beads taken  from stems.


01. Every part of the Tulsi plant- leaves, stems, roots, etc  is  considered sacred.


02. A person cremated with Tulsi twigs in his funeral pyre  will gain moksha and a place to repose  in Vishnu's abode - Vaikudam, according to The Padma Purana.


03. If a Tulsi stick is used to burn a lamp for Vishnu, it equivalent to burning innumerable  oil lamps before the deity.


04. It is believed that water mixed with  Tulsi leaves is given to the dying person, his soul will get Mosksha - heaven. There will be no rebirth for him.

05. It is a taboo to litter around the Tulsi plant  and make the surrounding place dirty.  Attending nature's call, spitting etc.will invite serious trouble.


06. In the state of Kerala the Nayars  keep  Tulsi plants to pacify or ward off evil spirits. In Tamil Nadu, in particular, Brahmins keep the plant to have peace of mind, success in education, trouble free wedding, etc.


07. Though there are no constraints about Tulsi leaves being offered to Lord Shiva, the Hindu God of Destroyer, Pundits - Shivacharyas normally avoid Tulsi leaves or take them with hesitation.


08. Tulsi Malas are  worn by  devout people and  is considered to be good  for the wearer, supposedly giving him  protection of the deity Rama or Vishnu. People wearing such malas should not consume non-vegetarian food, liquor and other beverages


09. Tulsi Japa malas (a string of Hindu prayer beads) made from Tulsi stems are commonly used by elderly people in the evening of their lives to chant mantras while meditating on God. They wear it around their neck or use it as rosary when doing prayer by holding it in their hands. 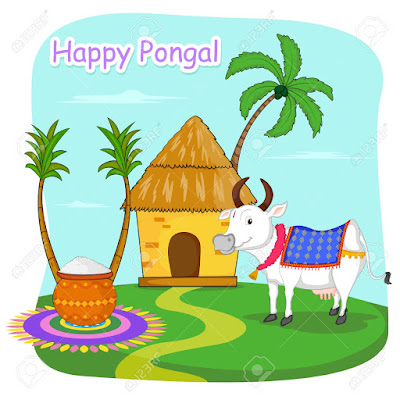 Some interesting facts about the Hindu festival Pongal (Sankaranthi)

In India there are various Hindu festivals - temple festivals as well as religious community festivals. Though the same festivals are being followed by various cultures, the method of celebration and food  to be eaten on the festive days may vary from state to state and from caste to caste. This is the dynamics of Indian culture that remains unbroken for centuries, keeping the old traditions and customs in tact; in this respect, it is obvious, India stands apart from the rest of other countries.  This diversity of homogenous Indian culture (with limited variations) is the hallmark of India. Among the Hindu festivals, Pongal is a popular one, dedicated to one of the Pancha Boothas ( five essential elements)  - Agni / light whose source is the Sun -  our  perennial source of energy,  without which, we will perish. Pongal festival Tamil Nadu.  123rf.com Pongal (Telugu: Sankranthi ), a four-day festival is an important one in Tamil Nadu, Pondicherry,  Srilanka and other countries where T

Mohandas K. Gandhi. Freedom fighter twitter.com If there is one south Indian  city  that attracted Gandhiji, father of our nation, more than the others, it is Madurai, Tamil Nadu  which is famous for the sprawling  Meenakshi - Sundareswarar   temple and the annual summer Chitrai Thiruvizha (festival) - Kalazagar (Perumal) getting into the Vaigai river.  Gandhiji visited Madurai city as many as five times  during his life time, each time he stayed in the house of his well-wishers and freedom fighters. One particular visit to Madurai in 1921 assumed much importance because on this visit he emerged with a new, but different attire - his famous loin cloth after discarding his traditional Gujarati attire . It is no exaggeration to say that Madurai played a crucial role in Gandhiji's tirade against the oppressive British rule. Gandhiji said about his new dress, “All the alterations I have made in my course of life have been affected by momentous occasions, and they have been

The mystery of European head on the tower of Big temple, Thanjavur.

1010 AD old Thanjavur big temple, a foreigner with a European hatYouTube.  Big temple Thanjavur, Europen head. www.team-bhp.com / The big temple, also known as Brihedeeshwara Temple dedicated to Lord Shiva is a  UNESCO world heritage site. Located in Thanjavur city, Tamil Nadu, once  a Chola seat of power, this awe-inspiring temple was built by the great Chola ruler Raja Rajan I in 1010 AD. The number of visitors to this huge temple is on the increase  day by day because it surpasses other Indian temples when it comes to its  architectural excellence, intricate stone images and sculptures of exceptional  workmanship, superb technical expertise, planing and execution and above all its hidden mysteries that will challenge the inquisitive minds!! To put it in a nut-shell, it it is just mind-boggling. That how could an ancient ruler achieve this great engineering marvel 1000 years ago when there was no such a thing called"technology", is a riddle. Thanjavur big temp