World over, corruption is a menace, but unlike India, it is going on in the shadows.  Corporates' money trickles down to so many people in the government, covering the higher-ups down to the peons. It  is policians' and   civil servants' favorite  domain nation wide. According to Corruption Perception Index (CPI) which ranks 180 countries awards India a score of 40, making  it the 81st most corrupt country in the world.  Corruption is part of life in the last few decades and no body can get past it as it is institutionalised.
Defined by the world bank as  the  'misuse of public property for private gain', it involves  syphoning off public money  and  misuse of power amounting to demanding bribes to get the job done. If not, the files will move at a snail's phase. Corruption peculates down to every part of the society and is visible in the administrative corridors of the govt. offices,  including govt.  hospitals causing mental agony to the  ordinary people living on the fringes of poverty. No daily job is done unless you pass the bucks under the table of a  govt, servant. Anti-corruption laws have existed since 1968, supported by agencies such as the Central Bureau of Investigation and the Central Vigilance Commission, but their independence and freedom to take action on the culprits are restrained by certain politicians who serve the vested interest.
No body can imagine the consequence of corruption in the Govt. offices. It adversely affects  the economy of central, state and local government bodies. It retards the growth and development of a country and its upward mobility comes to a standstill. In the midst of rampant corruption, economic progress faces road blocks and the tax-paying public suffers a lot as there has been poor infrastructure developments.
The following are the bad impacts of corruption:

01. Not good for the economy : Corruption Will lead to loss of wealth, productivity and prosperity. At stake will be future growth of the country.

02. Slow down of development projects: contractors don't get the funds right on time and, in the wake of it, important projects move either slowly or put on hold temporarily, causing inconvenience to the people and the workers.

03. Loss of public money and unsolved scams:  Several scams involving import of military weapons, leasing of mineral lands, etc result in the loss of billions of dollars of public money. The 2G scam of 2008  involving loss of whooping Rs. one lakh and 70,000 crores during the reign of Congress and its alliance partners took the country by storm. Neither the companies nor the people who masterminded this fraud on the govt are punished. With that huge misappropriated amount, India would have successfully completed certain important infrastructure projects that were beneficial to the people.

04. Compromising on quality: With respect to quality of imported products  for the govt. ex. defence items or any local contract work, ex. construction of bridges and a host of other things, quality is sacrificed. Is it in the interest of the nation?

05. Permit raj: For starting new businesses, right from getting permit to buying lands, water and electrical supplies etc.,  you have to spill extra money for every thing as you progress. This is quite irritating and this may discourage local industrialists and also foreign direct investments in India.

06. Corruption will increase poverty: Funds from the govt. program on eradication of poverty are misused by the middle men and the end result is they do not reach those who deserve it. So, the poor do not see any monetary benefits whereas the rich are well placed.  In the case of professionals, scientists and experts in certain fields, their talents are trampled upon by the seniors in the government offices. Disillusioned, most of them go abroad for  better jobs. For a developing economy, brain-drain is a problem.

07. Corruption in the exalted halls of judiciary:  If corruption takes roots  particularly in lower courts, it will  put the common man in misery. If lower court judges are bought by certain unscrupulous  middlemen  in return for favorable court decisions, people will no longer respect the court and corrupt judges and, at one stage, judicial system will face crisis. In a democracy, an explosive situation will develop that may lead to anarchy.

08. Illegal mining: Illegal mining of coal beds  and sands is widespread across India, especially the latter is a menace in Tamil Nadu where several honest govt. officials were killed  while on duty by the mafia groups. Goa accounted for large scale illegal mining of iron ores.  Because of widespread illegal mining of sands from the rivers, etc., of late, Tamil Nadu is reeling under water scarcity. Hundreds of lakes that carried a large body of water are not de-silted regularly. Hundreds of lakes in around are converted into housing colonies due to mismanagement. Now it is said in the source areas of Adyar river, etc in chennai there are granite quarries functioning and people complain that these quarries have blocked the flow of water in to Adyar. Water source areas  have now become either parched or bone dry and the weather has been pretty hot since April.

Choosing of honest political representatives with no criminal record in the past and present, simple govt procedures to get permits, etc, direct contact between the govt. and public to ease red tape, efficient police system, frequent performance evaluation of top government posts by a govt committee, regular evaluation of political representative's work, and most importantly severe punishment  for corrupt officials  for misusing of public money ----- these  steps will solve the problem of corruption to some extent; eradication of corruption 100% is impossible.

In a country like India, it is an Himalayan task to implement the above steps and keep a tab over every govt. department. Part of the blame goes to the public as the people need to be disciplined when dealing with the govt. laws and regulations. As for the leaders  with power and authority they should  fulfil the  promises given to people and try to solve their grievances. They  can be  stickler for discipline and get rid of corruption and nepotism in their department.  If you come down heavily on the corrupt officials, you not only gain respect  in the department but also the people's who elected you to power. They  will be happy and look upon you with reverence and gratitude. ''Service to humanity is service to god'.'

*********
Below you will find several funny cartoons on corruption appeared in Indian papers, etc. The cartoonists deal with the subject of corruption in a subtle manner:

Corrupt netha is going to jail in style, but the cartoonist going to jail in grief for the simple reason that he has exposed the politician's corrupt practises by way of cartooning.
A memorial to a political leader. During his time in prison the statesman was on his best behavior.

Why fuss about movie Bahubali making rupees 1000 crores. What about our nethas and their scams involving thousands of crores of rupees.  Where do they hoard the money?
There is no minister or political heavy weight across India whose name is not involved in  government scams. That he gets a bad rap is true, but, the important thing is it is the sensationalism that gives him publicity bonanza and takes him to dizzy heights. It is a good idea to modernize the prisons on par with 5 star hotel rooms with A/C, etc. In case scam cases go against him,  and if he is  not smart enough to get free from them, he will end up  spending time in the prison  comfortably. Of course, that will be at the expense of public money. Once he is out Scott free, another netha will be in
'Political 'tulaparam'. Nathas know the value  of adult  franchise being enjoyed by the people. Once they get elected to power with money power, they know how to make up the money spent on election trail. It is good to weigh them against sacks of bank bills to get the job done by them.

When participants in a protest march go against the government and  take the extreme step of  fasting  unto death, the police
take immediate action on them for the simple reason that they've  failed to take permission from them. What about  thousands of people in the city who have no shelter, no water and no toilet, and who end up starving most of the days? 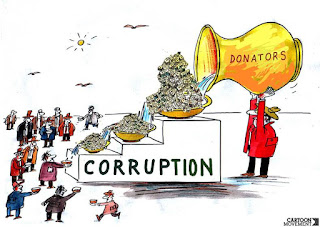 Corporate money trickling down to various people in the department.
This cartoon highlights the victory news with respect to gay marriage  in the USA. Texas was tough against the gay marriages.  In June 2015 the supreme court ruling was in favor of this. Like in the cartoon, politics can not survive without money power so, in a way money and politics are like a wedded couple (not unisex couple) - inseparable
Gandhiji  seems to look depressed over the bank bills bearing his image. Gandhiji does not like soiled bills - ill-gotten money ending up in the wrong place - those who serve the people.

That big money does not stay in one place is quite true. To get a job done by the government agency, it goes through different stages - all under the table. It is a world-wide ritual and nothing will stop it
In some states in India, foolish people chase money thrown by the contesting politicians like the way the animals in the cartoon. The beneficiary is politician who has an easy ride to power and pelf. No sweat.
When the govt. money is syphoned out,this is what money thrown by the culprit does when it goes into silent mode.
The incredible hulk is a political heavy weight and the pygmies are the people who voted him to power. Now, the denizens  do their obeisance to him to get the job done.


There is no way you can get a job done in some govt offices, unless you pass the bucks  behind the back on to the right people at the right time.
Gandhi's statue on the main road  has fiery eyes. Do you know why? It is not the Delhi summer that makes his  eyes red shot; His eyes spew fire every time some corrupt nethas ride past his statue. He knows our nethas are more preoccupied with their personal wealth and how to hide  it than in the service of people who voted him to power.